The Neuropathological Hallmarks of Alzheimer’s Disease 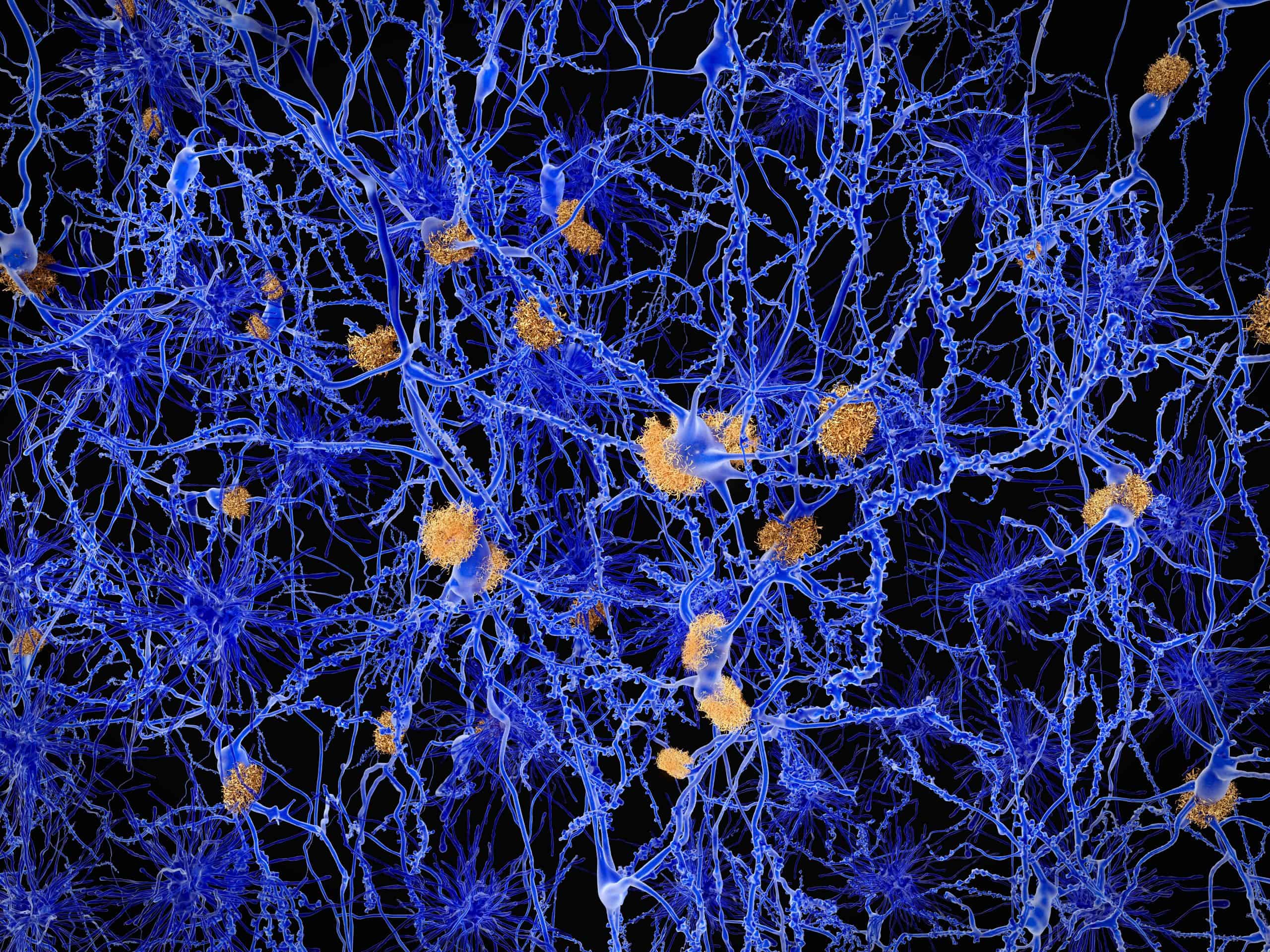 Neuropathology, or the study of diseases of the brain, spinal cord, and nerves, plays an important role in characterizing the pathogenesis of neurodegenerative diseases, such as Alzheimer’s disease. Neuropathological hallmarks, or characteristics, of Alzheimer’s disease consist of positive and negative lesions. Positive lesions include tau hyperphosphorylation, neurofibrillary tangles, beta-amyloid plaques, cerebral amyloid angiopathy, and glial responses, while negative lesions include neuronal and synaptic loss.

Below, we take a deeper look into these neuropathological hallmarks and how they affect the brains of individuals diagnosed with Alzheimer’s disease or other forms of dementia.

Tau, a microtubule-associated protein, is normally located on the axon and plays a helpful role in the brain, physiologically facilitating axonal transport by binding and stabilizing microtubules that help guide nutrients and molecules from the cell body to the axon and dendrites. However, in individuals with Alzheimer’s disease, tau becomes altered and forms neurofibrillary tangles within nerve cells up to 15 years before symptom onset. This alteration involves the translocation of tau to some somatodendritic compartments and hyperphosphorylation, misfolding, and aggregation of tau. Neurofibrillary tangles are intraneuronal aggregates of this hyperphosphorylated, misfolded tau which block the neuron’s transport system, harming the synaptic communication between neurons.

Tau is an emerging and newly understood element of the pathophysiological biomarker landscape. Similar to reducing beta-amyloid plaques, the inhibition of the tau abnormality is another highly promising therapeutic approach to Alzheimer’s disease and other tau pathologies.

The discovery of beta-amyloid plaques and their relationship to Alzheimer’s disease led to the ability to provide earlier diagnoses of the disease through amyloid PET scans and recently, the potential to target and reduce such plaques to delay clinical decline.

Glial cells are the most abundant cells in the brain, outnumbering neurons by approximately 10:1, and come in many forms, including microglia and astrocytes. Glial cells, and their relationship with neurons, are fundamental for brain function. Glia are critical for normal central nervous system functioning as well as its dysfunction, as they are directly related to all forms of neuropathological processes. Thus, the progression and outcome of neurocognitive and neurodegenerative diseases, including Alzheimer’s, depend on glial responses.

In healthy brains, microglia engulfs and destroys waste, debris, and protein buildup, including beta-amyloid plaques. However, in individuals with Alzheimer’s, microglia cells fail to clear waste and toxins in the brain. Similarly, astrocytes are typically signaled to remove and clear the remaining plaque buildup and cellular debris but do not do so in those with Alzheimer’s disease.

Neuronal and synaptic losses are characterized as negative lesions and are neuropathological hallmarks of Alzheimer’s disease. In individuals with Alzheimer’s disease, neurons become injured and die throughout the brain, causing connections between neural networks to break down which can result in shrinkage of regions of the brain.

Dynamic gain and loss of synapses are essential for healthy brain function. However, for individuals with Alzheimer’s, there are disruptions in the mechanics of neuronal plasticity which eventually results in a net loss of synapses. Synaptic loss is indicated as an early pathological event in Alzheimer’s disease and is believed to be driven by beta-amyloid and tau pathology.

While many of the neuropathological hallmarks of Alzheimer’s disease provide a window to indicate the presence of Alzheimer’s before clinical onset, they are typically identified through expensive, time-consuming, and invasive procedures, such as amyloid PET scans and cerebrospinal fluid extraction and analysis.