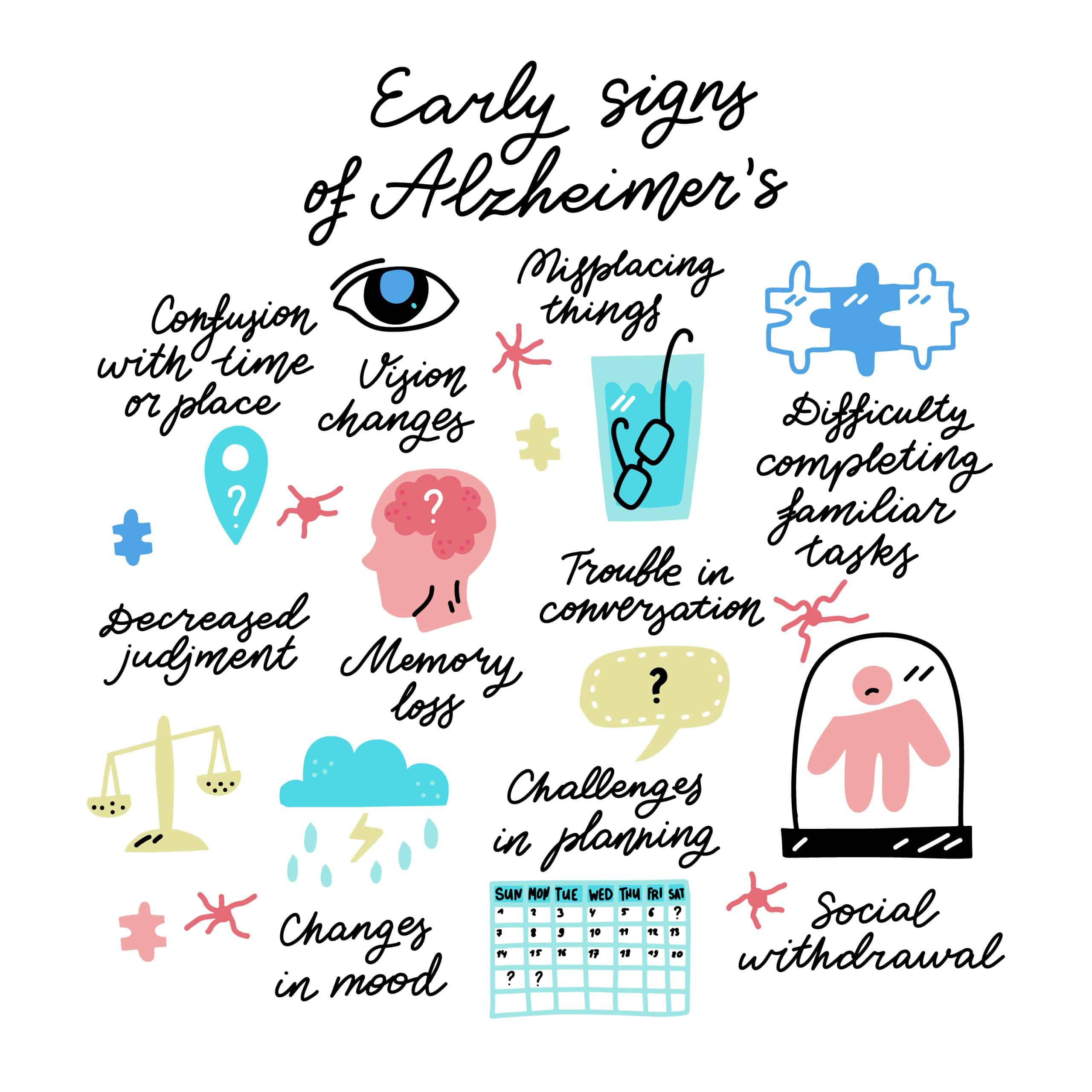 Historically, Alzheimer’s has been a devastating disease, but the tides are turning. Research focused on prevention, early detection, and treatment continues to pave the way to a whole new outlook on Alzheimer’s and other neurological diseases.

Similar to many other diseases, when Alzheimer’s disease is diagnosed early, treatment may be more effective and produce better health outcomes. Understanding and monitoring your brain health as early as possible is key to the early detection of Alzheimer’s disease.

Aging is a natural process of human life. As we age, we experience subtle and gradual changes in our bodies and brains; however, it is important to understand which changes in your brain are not caused by normal aging. Some of these changes may be early signs of Alzheimer’s disease or other forms of dementia. Here are some of the most common early signs of Alzheimer’s disease in young adults.

While we all have occasional memory lapses, memory loss that interferes with or disrupts your daily life is one of the most common early signs of Alzheimer’s. Signs of memory loss may include forgetting recently learned information, repeating the same question, and forgetting birthdays or other important dates and events and being unable to remember them later.

Planning is our ability to think about what tasks are required to accomplish a specific goal. Difficulties with planning may include forgetting the rules and steps to a favorite game or struggling with planning and cooking a familiar recipe or driving to a familiar place.

Some people who are in the early stages of Alzheimer’s disease may have difficulty solving problems or working with numbers. This could mean taking longer to complete familiar tasks or having difficulty concentrating on the task at hand.

We have all occasionally forgotten what day of the week it is, but regularly forgetting the date or being confused about the passage of time may be an early sign of Alzheimer’s disease. Those in the early stages of Alzheimer’s may also forget their location or how they ended up there.

Changes in vision and visual perception are one of the least-discussed signs of Alzheimer’s. Some individuals may struggle with visualizing and interpreting their surroundings. They may have difficulty judging distances and experience challenges while driving.

Spatial memory is our ability to recall the location of objects, places, or events. Someone in the early stages of Alzheimer’s may forget where they placed objects in their house or environment and may even place them in abnormal locations. They may also struggle to retrace their steps to find the lost object.

Those with Alzheimer’s disease may begin to experience a shift in mood or changes in their personality. In the early and middle stages of Alzheimer’s, many individuals struggle with depression. They may also experience mood swings, confusion, irritability, anxiety, or may withdraw from their normal social activities.

In the early stages, individuals with Alzheimer’s may experience changes in speech, such as difficulty recalling words or finding the right word to use, pausing while speaking, or struggling to finish a sentence.

Early detection in the pre-symptomatic phases begins with regular and frequent measurement and monitoring of brain health as early as possible to identify impairment and assess the risk of disease development.