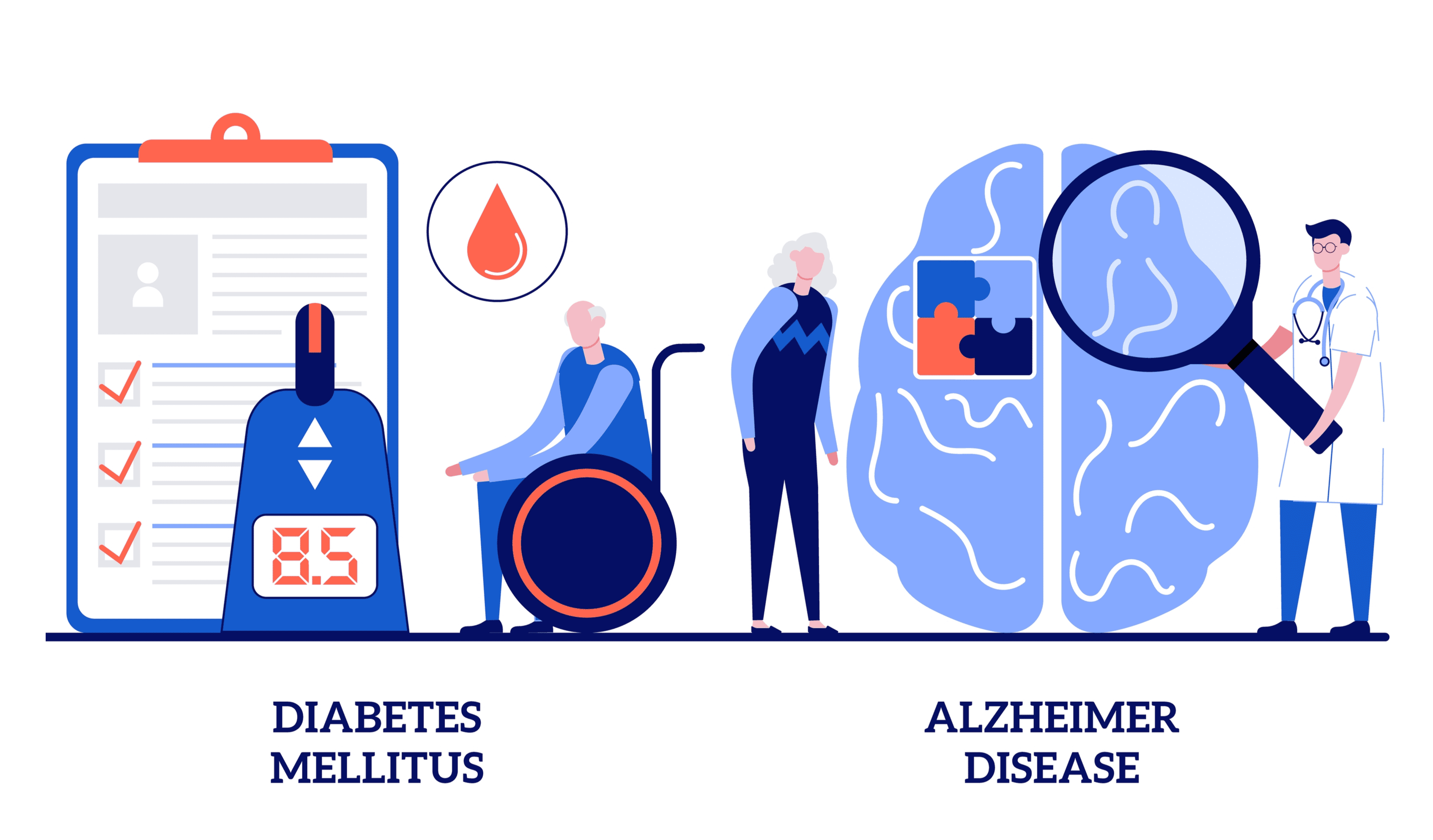 A comorbidity is an additional or secondary disease that an individual may have. Many individuals with Alzheimer’s and other forms of dementia are living with multiple comorbidities that are often underdiagnosed.

In a population-based study from 2017, it was found that 91.8% of individuals living with dementia also have another health condition, with 13.2% having one condition, 33.8% having two or three conditions, 27.8% having four or five conditions, and 16.9% having six or more conditions.

Both clinical and molecular studies suggest that chronic diseases may be associated with an increased risk of Alzheimer’s disease in different populations. While the causes of disease comorbidities in Alzheimer’s are not yet fully understood, disruptions such as inflammation in several shared biological pathways have been proposed to be the underlying mechanism for this occurrence.

Below, we detail four common disease comorbidities in Alzheimer’s disease and the importance of early and frequent neurocognitive testing for individuals with diseases associated with an increased risk of developing Alzheimer’s disease.

Below, we outline four common disease comorbidities in Alzheimer’s disease.

Approximately 30% of adults aged 65 and older and 55% older than 80 years show some degree of hearing loss. The number of individuals impacted by age-related hearing loss is estimated to grow to 580 million worldwide by 2050.

In a study that tracked more than 600 adults for almost 12 years, researchers found that hearing loss correlated strongly with the development of dementia. Mild hearing loss doubled dementia risk, moderate hearing loss tripled the risk, and those with severe hearing impairment were five times more likely to develop dementia.

In 2020, an estimated 596 million individuals worldwide were living with an untreated distance vision impairment, 43 million of whom were blind.

According to the World Health Organization, type 2 diabetes affects 422 million individuals worldwide and is the most prevalent metabolic disease. Type 2 diabetes is a well-established risk factor for Alzheimer’s disease, and the association between the two has been studied in depth.

At Altoida, we are building the world’s first Precision Neurology platform and app-based medical device to enable robust measurement and monitoring of neurocognitive brain health.

By engaging in a 10-minute series of highly immersive augmented reality and motor activities, we transform your smartphone or tablet into the most powerful tool to assess neurocognitive function. Our device extracts and provides nearly 800 cognitive and functional digital biomarkers from integrated sensors in your smartphone or tablet, producing detailed neurocognitive domain scores.

When paired with our innovative artificial intelligence, this method will pioneer fully digital predictive neurological disease diagnosis. After our recent Breakthrough Device designation by the FDA, Altoida’s device will provide patients with a predictive score that will enable a highly accurate prediction of whether a patient aged 55 and older will or will not convert from Mild Cognitive Impairment to Alzheimer’s disease within 12 months.

When this score is taken in conjunction with our predictive score, providers will be able to make specific, personalized conclusions about how neurological diseases are uniquely affecting their patients, enabling a personalized precision approach to treatment and care plan development.

To learn more about Altoida’s Precision Neurology platform or disease comorbidities in Alzheimer’s, contact us today.