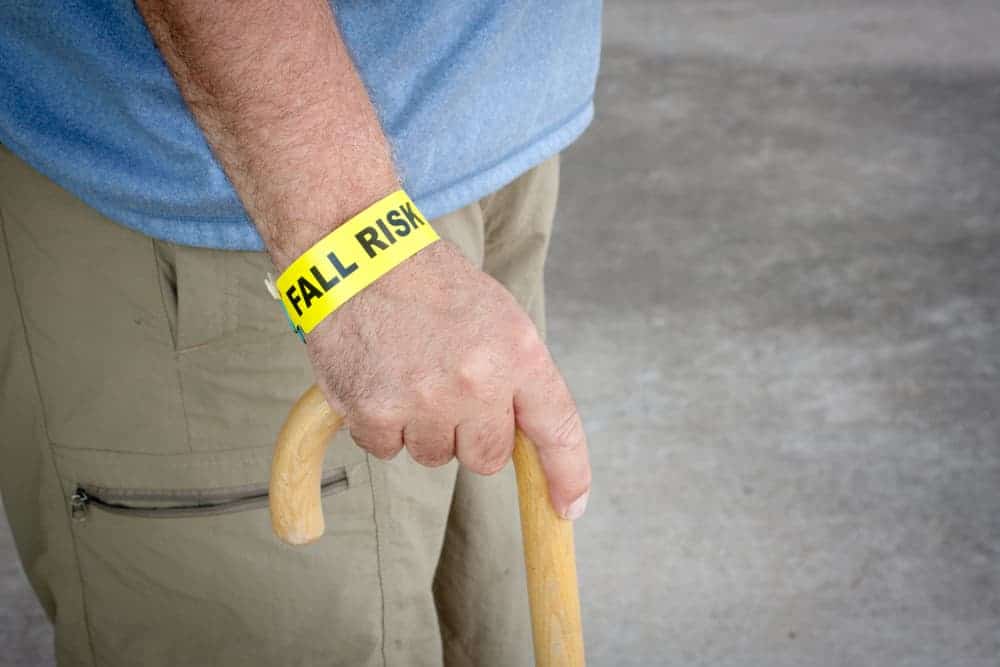 Falls are a leading cause of broken hips and other serious injuries among the elderly, and those with dementia are at a particularly high risk of falling. According to the Centers for Disease Control and Prevention (CDC), more than 95% of hip fractures are caused by falls.

Understanding fall risk for dementia patients is so important, whether in a home environment or a senior living facility. Falls can cause broken bones, serious head injuries, and psychological issues (e.g. increased fear of falling)—all of which can greatly impact the patient’s quality of life and their required level of care.

In this article, we will discuss risk factors for falls, tips for reducing the risk of falls, and methods for improving the identification of dementia patients at risk of falls and injuries.

Individuals with dementia are four to five times more likely to fall than older people without cognitive impairment. For those who fall, the risk of sustaining a fracture is three times greater than for cognitively healthy individuals.

While not every dementia patient will experience falls, many symptoms can contribute to elevated fall risk for dementia patients. Falls in older individuals with dementia are associated with multiple intrinsic and extrinsic risk factors, some of which are shared with older adults in general, while others are unique to dementia.

Risk factors for falls in dementia patients include:

Depending on the cause of dementia, patients may experience changes in gait and balance. For example, impaired balance and changes in gait typically occur in both Alzheimer’s and Parkinson’s disease; however, in the case of Alzheimer's disease, these symptoms usually arise later in the disease course.

Changes in balance and gait in dementia patients, such as decreased coordinated stability, increased postural sway, and impaired static standing balance, have been associated with an increased risk of sustaining falls. These deficits can contribute to difficulty walking and balancing, which can ultimately lead to falls.

Several causes of dementia can affect the way patients perceive and process information from the eyes. Common issues with visual perception in dementia patients that can increase fall risk include:

Behavioral and psychological symptoms of dementia (BPSD) affect up to 97% of community-dwelling patients with dementia. BPSD includes a range of neuropsychiatric disturbances, such as depression, agitation, anxiety, aggression, and apathy—all of which can contribute to increased fall risk for dementia patients. Several studies have found that psychosocial factors, such as verbally-disruptive behavior, attention-seeking behavior, impulsivity, anxiety, and depression are associated with increased fall risk.

As dementia progresses, cognitive and functional impairments become more severe. Clinical and research evidence has established a close relationship between cognition and gait. As the severity of cognitive impairment increases, gait impairments and falls are more prevalent.

In addition to the above risk factors for falls in dementia patients, the patient’s environment can play a role in falls. Whether in a home environment or senior living facility, several protective considerations should be considered:

While the above protective considerations may help reduce fall risk for dementia patients, there are more robust, strategic methods that can be employed in senior living facilities that may prevent or significantly reduce the risk of falls.

Assessing fall risk at intake and frequently reassessing fall risk throughout patient care is an essential element needed for developing fall prevention strategies to reduce the negative impact of falls on an individual’s quality of life as well as the economic burden of treating falls.